I have always loved Eclipses whether it’s solar or lunar, it doesn’t really matter to me. I know that energy will be intense leading up to the event and through it, if only for a fleeting moment.

Not only are they interesting astrologically, they’re probably more interesting energetically. Before we look ahead at the energies coming our way, I found a couple GIFs from the NASA site to share. This first link Partial Solar Eclipse of 2018 Aug 11 is an image showing the path of the greatest eclipse. This second link is an animated GIF that shows the shadow Aug 11 2018 Eclipse. As you can see, it’s going to be up north. This removes the bulk of us from enjoying the physical activity of the show.

Energetically, there are a few aspects worth talking about. Here is a wheel representing the event. 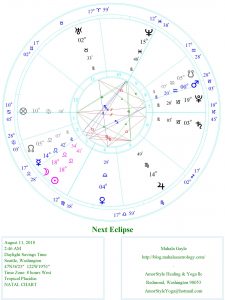 Because it’s an eclipse, the Sun and Moon are conjunct on 18 degrees Leo.

On top of all that, Mercury, Mars, Saturn, Uranus, Neptune and Pluto are all in retrograde. As we all know, retrograde planets give us the opportunity to look back on things that have happened in the past. They highlight the karma. We’re going to get to revisit what we have done in a new way. So, we’ll keep that in mind when reviewing the aspects above.

The Sun and Moon represent the masculine and feminine energy and the conjunction shows it coming together in a unified manner. It is a focused, driven, aware, intuitive combination. It represents an energy of knowing what needs to be done and being able to make that happen. It can also be a powerful emotional combination, or emotion with power.

Now, where is this eclipse? In Leo. We’re going to get a show. Leo loves the limelight and wants to put on a show. There will be theatrics. It will be strong, in your face type of energy. We’ll probably see some very opinionated people make a lot of noise, or someone try to motivate people into action or see leaders stand up for something in a dynamic drama centered way. Expect it to be spirited, grandiose and egocentric, it will paint the stage.

What’s the first planet to join this conjunction? The messenger Mercury which dominates communication, intellect and our thought processes. Seeing that it’s conjunct this theatrical Leo, I would expect that this show we’re going to see will be spoken, or written, yet very calculated. Seeing that mercury is retrograde, there might be some big show about issues that should have stayed in the past. Or, someone may sing and dance trying to bring previous issues back to the surface. The show will be mentally stimulating and require active participation in order to track all the details.

With this triple conjunction, we find that it’s square Jupiter. Jupiter brings abundance, purpose, Optimism, yet the square will most likely bring out a more forced type of energy like being over-optimistic. Being in Scorpio, we find the influence can be serious, it wants to drive things forward, it’s stubborn and doesn’t want to lose. It would seem that this square is going to put some real zeal behind the theatrics that will be playing out in the conjunction. We’ll probably find that the news stories, or propaganda, could be seen as having that kill before we’re killed type of sting to them. The Mercury aspect of this square will tend to confuse the ability to focus. Think of going to a magic show and being stupefied by the disappearing elephant in the center of the room. So be careful, it’s just a show.

This eclipse conjunction also makes two aspects into Capricorn to Pluto and Saturn. As we know, Capricorn brings in energy that is determined, ambitious and realistic. Saturn tends to reign things in or put a noose on them. It wants to bring structure, rules, boundaries to situations. This hard aspect may bring out energy that is cynical or callus. We’ll probably have to look really close in order to see any real joy in this situation. Pluto wants to bring out what’s hidden and drive people to get to the deeper meanings of things. Being in Capricorn, people will not, generally, be open hearted or empathic to the situation. Bringing this back to the show, we will probably be critical of the details that we cannot see and not believe what we’re presented. There will probably be hidden meanings behind the outward theatrics, but it will not be greeted with open arms.

Finally, for this conjunction, it’s also triggered by Neptune. This planet will accentuate the imaginations and dreams of people or feed the illusion. On it’s good days, it might be a lighthearted song and dance, but in this case it’s Quincunx which is going to create a state of not understanding. This trigger could bring out the darker aspects like delusions or escapism. And, it’s also retrograde which may make us feel like we’re being forced to watch a bad movie again. The Neptunian energy could make people want to turn to mysticism in order to get a handle on what just happened.

On a bright side, we have Venus trine Mars which may accentuate the duality of situations. It may be that people love it or hate it, but there probably isn’t much middle ground. Mars is also retrograde moving back into Capricorn showing that there might still be some work left that must be looked at before we can move on.

Venus is also in Libra which is fairly soft. It brings out kind, evenhanded energy with a strong willingness to get along, but that is being attacked by a square Saturn which will probably upset a bunch of delicate people. Saturn doesn’t want to make it easy for anyone who wants to get along at this time. Think of it as wanting to get along, but you’re so pissed off that you just stand there with close fists fuming about the situation.

It gets even better when we look to see that Mars is square Uranus and Semi-square Neptune. Mars is going to light a fire under the situations that transpire around this eclipse. It is a planet of doing and it’s pronounced in these aspects. Mars, under the Uranus influence will bring out the I want it and I want it NOW type of energy. It’s impatient, high-strung and tense. This may show that whatever the show is that we’ll be going through, we will most likely be on the edge of our seats demanding it to stop regardless of the consequences.

Now that we’ve gotten through the bulk of the harder aspects, is there any good news?

Jupiter is trine Neptune. Jupiter is a source of abundant energy and Neptune is linked to mysteries and illusions. Dreams and abstract thoughts are ruled by Neptune and it’s sitting in a water sign which should amplify the emotional impact of things. We’ll probably find ourselves looking for the path of least resistance in order to get through the show, whatever that is.

The Saturn, Uranus trine should bring challenges and restrictions to high technologies. Uranus will want to bring up revolutionary and rebellious energy. Saturn will probably put some order to it or link it to the governing bodies.