I love crypto-currencies. Out of all the technologies that have come along in the last fifty years, this is one idea that has the potential to give the power of the purse back to the people. If you haven’t looked into cryptos, you should. I did. Everyone should. Once you understand why they are so powerful, you will make the effort to learn how to deal with them and front run the big change that is coming.

In this article, I figured I would take a slightly different approach to see if I could learn a bit more about the personality of Bitcoin.

In order to really do this, we need to know when and where Bitcoin was created. The closer we get to that time and location, the more precise the astronomical alignments and resulting personality traits will be.

After a bit of research, anyone can discover that the first mined block, or the first ledger entry, was published at 18:15:05 GMT on the 3rd of January 2009. This is a good representation of the ‘breath of life’ for Bitcoin. It would be similar to a birth moment for a person. Sure, the code would have been written before that time, but it wasn’t released to the world until then.

Now, where? Here you’ve got to dig a little deeper, do some critical thinking and do what mathematicians do – approximate! Even though the author Santoshi Nakamoto claimed to be Japanese, evidence suggests that he didn’t live in Japan. He left clues in the genesis block that he was aware of information published in The Times in London. Thus, it would be logical to extrapolate that the first mined block was probably mined around London.

As it turns out, the London area is the home of Greenwich, the location where time starts. This make it really easy to interpret the first block publication date of 18:15:05 GMT. Basically, it was published in time zone zero. Thus, 6:15:05 pm on the 3rd of January 2009. 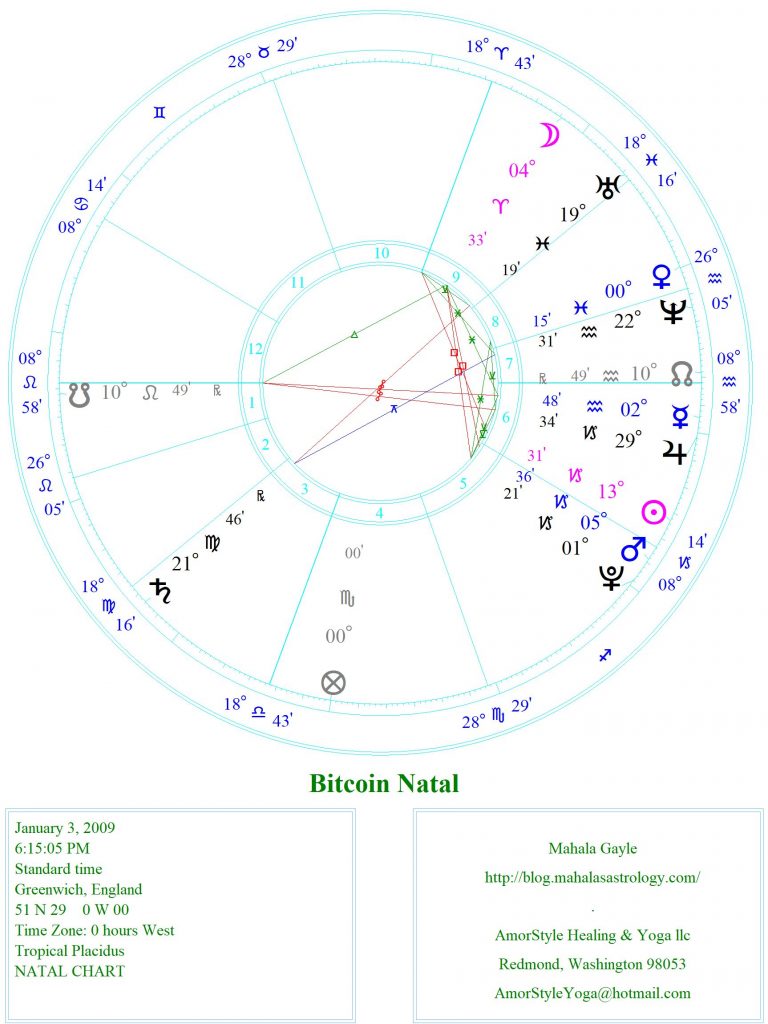 If this is an accurate time for the birth of Bitcoin, we would expect it to have personality traits that align with the influences present at its time of birth. To get to that, we can easily run a Cosmo report and take a look.

To make this really easy, I’ve uploaded a PDF version of the report that you can click on and read. It will also make for a nice printout. You should go read the first few pages and then come back for the review.

Ha, Bitcoin has Leo as the rising sign! This coin is the leader in the crypto currency space and it has all been about the show for years now. There is an energy in this coin that makes people aware of the mission that cryptos are here to perform and Bitcoin is synonymous with crypto currencies. It’s the widest known brand there is right now, even for people that know nothing about cryptos.

This coin is also full of theatrics. It wants to make a big impression. There are so many characteristics of this sign that resonate in the Bitcoin community and how Bitcoin interacts with the rest of the crypto currency space in general.

Bitcoin’s Sun is in Capricorn. Yes, this coin is serious, disciplined, ambitious and driven to get it right in order to be successful. It has always been in control, capable and efficient. That list of characteristics seems to match perfectly.

The Sun is in the 6th house. This is about perfecting yourself, your techniques, skills and work. There is a strong motivation to be a perfectionist. Again, this is appropriate for this coin. Bitcoin is all about perfection and people in that community are very proud of the fact that the coin performs as expected. Bitcoin has never been hacked. Lots of other networks and exchanges have, but not the blockchain that supports Bitcoin.

The Moon is in Aries. Is the energy about Bitcoin fiery? Emotionally Impulsive? Does it strive to express itself honestly and not make you guess regarding its emotions? Well, true and true and true. Bitcoin has a strong masculine sense and the people in the community are willing to fight for what it stands for. When people get involved in this coin, they get very heated when talking about the fundamental principles. They will argue decentralization and independence with the conviction of a mathematician and the fire of a warrior!

Please take a look at the Cosmo Natal Report that I drew up for Bitcoin and tell me what you think. When I read it, it seems to match what Bitcoin represents. If this really does represent the birth of this crypto currency, I might just run some forecast software to see what types of energy might be coming along for this coin. You’ll have to stay tuned for those reports!

The Cosmo Natal Report for

1 thought on “The Personality of Bitcoin”