I used AstroMap to look ahead to see if I could find an energetically concentrated period of time in the immediate future. The time that jumped out at me was November 26th & 27th. It looks like we’re in for a storm of news building towards that point in time.

As always, my summary is followed by my analysis.

Working up to the 26th and 27th of November, we have an energetic situation that is building for leaders around the world. This situation should play out in the media or through channels of mass communication. Whatever is discussed will seem like a big deal, or, there will simply be an abundance of it. The influential areas are legal and judicial, suggesting that the greater population will get to follow more activities that are aligned with arrests, or indictments or subpoenas or lawyers arguing points and whatnot.

The situation is expected to be emotionally impacting for the source of the fight comes from a water sign. There are strong ties to socialistic philosophies, but in an agitated way. The activities may seem explosive and abusive and they will strike at the heart of the cultural identities of the groups in conflict.

Think of the next couple weeks as the unfolding of a legal drama that is played out over the airwaves. Expect well known figureheads come fourth and make declarations and then back it up with subpoenas and indictments. This energy comes from a place of protecting freedom at all costs. Or doing anything that the leader can do to protect freedom using judicial actions and mass media. Expect press conferences where heads of organizations use the law to make forceful statements.

And it’s not just one event, but it’s a number. It’s like the energy has aligned to setup a collection of events that unfold all at the same time. Come the end of November, the general public will probably be tired of hearing announcement after announcement and they will wonder about the state of things. Wonder about the culture and the impact these announcements will have on it. There will be an accompanying feeling to fight, but it might be expressed through crying or turning off the TV so as to try to escape what is unfolding.

The planetary hotspot looks to be southern California for the Sun Jupiter Mercury conjunction. This could indicate that that litigation could be about the fires in California or the election in Arizona. Nevada can also come into play. Because Mercury is in play, we want to think about this as being intellectual and news travels fast.

The point of contention for Saturn is sitting over Florida hinting that there could be lots of restrictions or blockages in that area. Also, the contention point for Pluto is just sitting off the coast south of New York or just off Washington DC. This suggests that the transformation energy could still be playing out on the US government or through the US lawmakers.

The conflict between Uranus and Venus seems to be far enough away from Hawaii so as to not bring that into play, thus I’m looking towards the African and European alignment with Venus. Look for litigation to ‘spring out of the blue’ from the below-mentioned countries and that the people will see it as being anti, or in defense of, their culture.

Now let’s look at the data.

Chart of the Stars 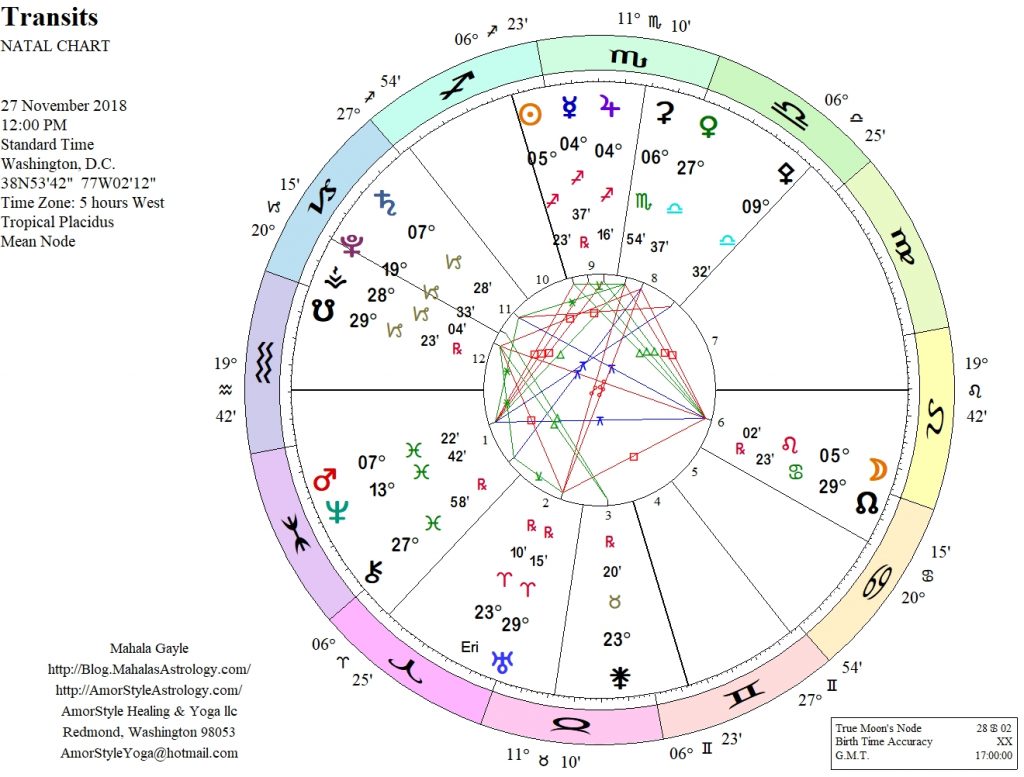 Note: House placement is based on the time of day and we have no specific time of day to look at. Thus, houses are ignored in this report.

Sun, Mercury and Jupiter are conjunct in Sagittarius

Jupiter moved into Sagittarius Nov 8th, the Sun will join it on the 22nd and Mercury is already there. The Sun moves into perfect conjunction Jupiter on the 26th followed shortly thereafter by a conjunction with Mercury on the 27th where all three objects are within a degree. This conjunction should produce energies that we can all witness on a global scale.

The major influence is Sagittarius. This is a fire sign that transforms through its passion to understand and achieve freedom. It is philosophical, generous and idealistic. This is the type of energy that is enthusiastic with out bounds. There is curiosity and the ability to manifest thoughts. On the more agitated side, this sign brings in energy that doesn’t like being constrained, it can create situations where what comes out, or what is said, is done so without regard to how undiplomatic it may be. It is an influence that sets up situations where it promises more than can be delivered. It can be tactless and impatient.

Who is involved in this?

The Sun represents power. In the mundane sense, it is those in power. It is people or organizations that hold and use power. Think leaders, figureheads, people in positions of authority (like government officials), presidents, CEOs, etc.

Jupiter is about abundance, prosperity, law, judicial system, justice, rule of law, upper class people, material wealth, etc. It amplifies what it comes in contact with so it can bring or take away fortunes.

Even though this seems to stand out as the biggest influence in the sky (for this time), we’ll want to see what types of influences are working on it to get a feeling if the conjunction will feel comfortable or agitated.

Mars & Neptune are square the conjunction

In Pisces we find Mars and Neptune. Pisces is that gentle artistic influence that is full of emotion. It wants to bring out the intuitive, wise and romantic aspects of the planets as they travel through. Unless, of course, there is discord. With discord we find there could be influences that bring out escapism, martyrdom, criticism, emotional issues of the past and sensitivities to cruelty.

Here we find Mars, the planet of conflict, police action, military and war in an emotional sign. Likewise, we find Neptune which has a strong attachment to socialistic ideals, things that are undisclosed, fraud, all things fluid in a sign that supports its influences.

Venus is in Libra and Uranus is in Aries. Here we have an explosive energy fostered by technology and scientific invention that is in direct conflict with an energy that is directly related to social and cultural affairs.

So, what does this all mean? I cover this in my summary section above. 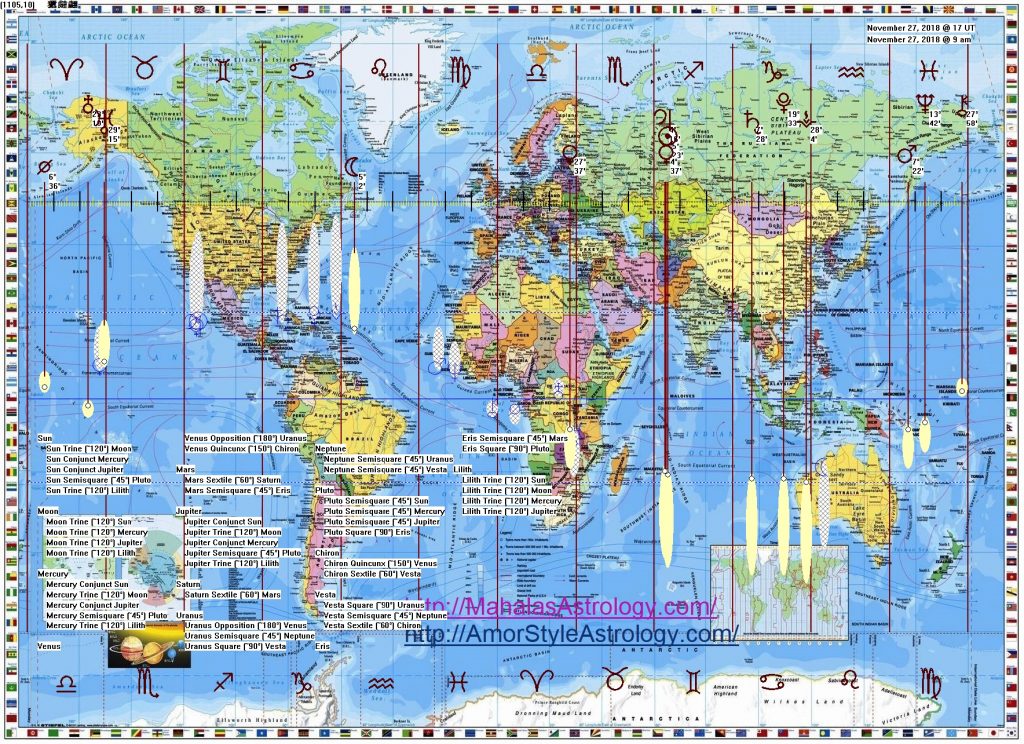 As you can see in this map, the major conjunction is around 5 degrees Sagittarius. This puts the direct location in the Indian ocean but aligned with Pakistan, Afghanistan, a couple more ‘stans into Kazakhstan and central Russia. The opposite point of contention shows up in the southern California, Arizona, Nevada, Idaho, eastern Oregon area of the US.

The Neptune Mars agitation comes from east of Papua New Guinea or the Solomon Sea. The opposite point of contention is just at the western most part of Africa.

How do I interpret this? It’s in my summary above.

Seems like we’re going to go through a time where the leaders around the world are going to actually start the litigation process and it will be plastered all over the news. In a way, it makes for a good show. On the other hand, when the judicial system is brought into play people go to jail.

Make sure your karma is good and your foundation is strong.