If you live in Europe, you’re probably well aware of the Yellow Vest movement that started in France and has found support in many of the surrounding states. It has been followed closely by people in the alternative media, but I doubt many astrologers are interested – which probably makes me the exception.

Because this movement seems to be decentralized in its leadership and because I’ve noticed the transit of Pallas across Europe, I wanted to look to see if there was some correlation linking the activities to the influence that we might expect from Pallas.

To get started, I’ll save you a little time with a few paragraphs from the Wikipedia which states in Origin and nature of the movement section:

A woman from the Seine-et-Marne department started a petition on the change.org website in May 2018 that had reached 300,000 signatures by mid-October and close to a million a month later.[49]Parallel to this petition, two men from the same department launched a Facebook event for 17 November to “block all roads” and thus protest against an increase in fuel prices they considered excessive, stating that this increase was the result of the tax increase. One of the viral videos around this group launched the idea of using yellow jackets.[78]

The movement is organised in a leaderless, horizontal fashion. Informal leaders can emerge, but some have been rejected by other demonstrators and even threatened. According to John Lichfield, some in the movement extend their hatred of politicians even to any “would-be politicians who emerge from their own ranks”.[79][80] The yellow jacket movement is not associated with a specific political party or trade union and has spread largely by social media.[81]

The yellow vests movement has been described as a populist,[55][82] grassroots[47] movement for economic justice,[48] opposing what it sees as the wealthy urban elite and the establishment.[83] …

So, sometime in May of 2018, someone started a petition on the Change.Org website which started this movement. The fact that it’s supported by Change.Org makes me suspicious, but, the rebellion is what it is and I’m pretty sure it will make the history books in one form or another.
After looking around a bit more, I’ve found a similar petition started in Ireland which I’ve cut and copied into the end of this article. That petition seems to be a list of demands that are both radically right and left. I’ve also found a petition started in Canada which has a few issues that are different than what was posted in Ireland. Yet, what the petitions have in common is a deep seeded fight to get out from under political control – a push for freedom by doing what is ‘right’ and what appears to be a push towards individualism.

The push to do what is right

Pallas represents the Athena architype which is an intelligent, cerebral warrior and peaceful general that is able to recognize patterns and link ideas together. She is at home in Libra for she can see both sides of situations with an eye towards what is just. She is not blind justice and expects everyone to claim their personal power.

Now, go review the Yellow Vest petitions and tell me if you see the Pallas influence in their statements. I see it. If you don’t, the rest of this article is not for you.

If what we read in the Wikipedia regarding how this petition started in France, we’ll need to walk back into May of 2017. Here is a map of the position of the planets at the New Moon on May 15th 2017. 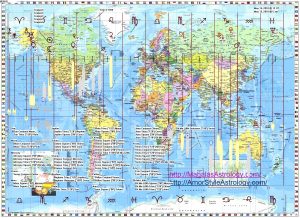 What is the first thing that stands out? Uranus is on 0 degrees, 0 minutes Taurus. Uranus is the planet that represents the political right, rebellions and riots. At the same time, Pallas was in Gemini over the central US conjunct Venus. As we all know, Venus brings in a strong diplomatic energy and would be considered complimentary to Pallas.

Two days later, Venus is perfectly conjunct Pallas and the Moon joined in.

Advancing ahead in time to August 8th, we find that Pallas has a perfect conjunction with the Sun and Mercury in Leo. Here is the map. 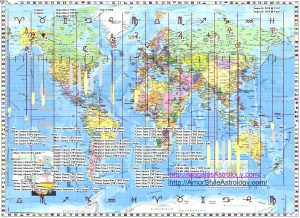 So here we have leadership, communication and the energy to do what’s just, coming together. At this time, we also see that Venus is parked directly over mid France. One could assume that the message that Pallas brings gets amplified at this point as the energy comes from Leo which is going to want things to happen in a big way.

As the Wikipedia claims, by October there were more than a quart million signatures. Here is a map of October 2. 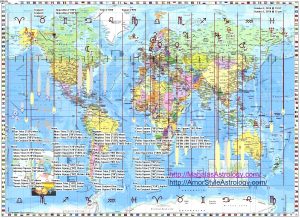 Notice that Pallas is now mid Virgo in perfect opposition to Neptune and in trine with Pluto. Neptune represents left-wing political idea like socialism and Pluto is the transformer. Likewise, the Sun, is centered over Germany, Lilith eastern France and Uranus is retrograde heading back towards Aries, but it’s not there yet.

Come November 4th, Pallas is directly over France on the cusp between Virgo and Libra. Here is the map. 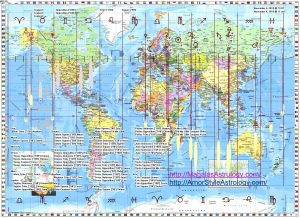 Notice here that Uranus is nearly perfectly back to the same degree that we saw in mid-May which is listed as the start of things. Yet now, Pallas is square Saturn. The influences now come in regarding rules, regulations, limitations and restrictions.

Two weeks later we still have Pallas square Saturn and it’s traversed most of France.

By the New Moon of January, Pallas had traversed most all of Europe and Mars entered Aries to be in nearly perfect opposition the France. All the while, Uranus is standing still preparing to turn direct and it’s in direct opposition to Pallas. 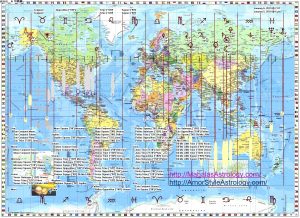 Where are we today?

Well today is the 19th of January and there are more protests in France and the influence is spreading all around the world.

Is there any hint that this energy will diminish? Intensify? Stagnate?

Continuing into the future

If this movement is any way associated to the influences Pallas, what can we see moving forward?

Here is the map for February 13th. 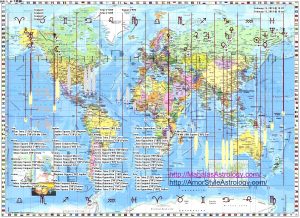 In this map, we notice that Pallas is 29 degrees and 23 minutes into Libra, but it’s standing still to turn retrograde. This is hinting that we’re going to have to relive what we just went through and the aspects that Pallas is going through here hint at what we can expect during this retrograde.

Pallas is trine the Sun, in opposition to both Mars and Uranus and square Pluto. The opposition to Mars and Uranus is nearly perfect. 29 degrees Aries is linked to the idea that people work together with deep concern for the future. The Mars Uranus conjunction is going to bring out that fighting rebellious energy suggesting that we’re going to continue to see riots during the retrograde. The wildcard here is that the Dark Moon Lilith is square the Sun hinting that the leaders may get triggered during this time and react badly to this movement.

Also, notice that Pallas turned retrograde just before it got to Cairo Egypt or the capital of Turkey, Ankara or central Ukraine. Suggesting that Russia and the Middle east are not going to see this energy yet.

When we move ahead to March 6th, we get the following. 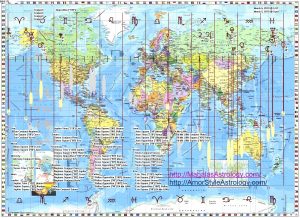 What do we see here? Uranus is at zero degrees Taurus again. Looking back to the original starting date, we find Uranus has returned and it’s in direct opposition to Pallas again. Pluto, with the help of the Dark Moon Lilith are now square.

This configuration suggests that Pluto is pushing for Pallas to make more transformational changes and that the rebellion influence from Uranus will be a strong pushing force.

Come May 30th, Pallas stands still to turn direct. Here is the map. 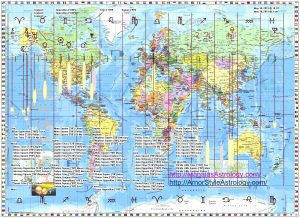 At this moment, Palls is trine the Sun, square Mars and nearly perfectly conjunct the Dark Moon Lilith. What’s more interesting is that it stands still at 10 degrees 23 minutes Libra which is directly over the heart of Germany. This degree is linked to the idea that – this person is ready, at all times, to fight for what they believe in, particularly concerning the rights of others. The degree suggests that if military action is not taken, the activity can be successful (astrological degrees of life by Harold Hanson).

The next big event for Pallas is the total solar eclipse on July 2nd. Here is the map. 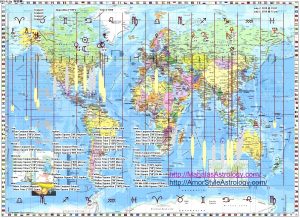 The thing to notice here is that Pallas is in a perfect square to this eclipse. That eclipse is almost perfectly over Washington DC too. Pallas is square Saturn too. Pluto Saturn and the Dark Moon Lilith are also conjunct. This could be a very powerful eclipse for Pallas. 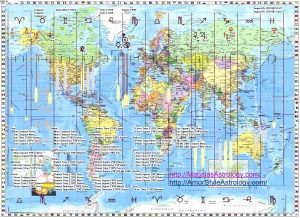 When it does it’s in sextile to a Sun, Venus, Mars, Juno conjunction that is shortly joined by both Mercury and the Moon. In a way, this is suggesting that as Pallas moves out of Libra, it does so with relatively good energy.

To me, it seems like more then a simple coincidence that Pallas is traversing Europe and we’re seeing this fight for justice play out. Seeing that Pallas is interacting with Uranus, it suggests that its more of a drive towards individualism rather than socialism – even though some of the points are clearly socialistic.

Today is the 19th of January and we’re only hours away from a lunar eclipse that will be seen all across both north and south America. And as you’ve seen above, come July 2nd there will be a solar eclipse that is energetically over Washington DC. To me, this gives us a timeframe to watch for Pallas. Even though it doesn’t leave Libra until August, this solar eclipse will probably steal the show.

I would say that Pallas working its way back into Germany is significant. It’s as if there is something that needs to be revisited there or the energy didn’t get picked up there on the first pass. If Pallas is related to this energy, I would expect it to stir up the German population into action before this event is over.

As always, I look forward to your comments.

Rebel UK MPs Are Planning To Seize Power From Theresa May

Calling on all people who love Ireland and want to end injustice in our land to SIGN THIS PETITION uniting us against corruption, cronyism and political deception

As, recognition of the desire and right of all People to live, work and thrive in a safe modern and dignified manner.

A call to unity and action, in the form of a simple ‘yellow vest’ has rang out, across many Nations.

We, the Irish people here today, recognize and acknowledge that call, and we gather with purpose and determination.

No longer, shall we accept, cold, cruel, bureaucracy as a legitimate reason to use force against those struggling to keep a roof over their head.

No longer, will we tolerate, corruption, cronyism and political deception.

No longer, will we allow, our People to suffer for want in this Isle of plenty.

In deference to all of the above, we insist action be taken immediately with the following demands.

Irish People stand tall and proud, as is your right. Let this Call to action, spread across the whole of Ireland. Take to your streets, roads and Bridges. The time to stand together has come. The time to defend our children’s future has arrived. We are stronger than our divisions.

1 thought on “Pallas Involved in the Yellow Vest Movement?”