This was created in response to what my Mom posted on her site after the latest Supreme Court Appointment – Planet Alert October 2018. I figured I would dig in in order to expose a little bit more about the democratic party based on its formation time. The idea behind this post is to create a placeholder for this information that can be reviewed in future posts.

The time selected for the birth of the democratic party is January 8th, 1828 @ 10 am in Washington DC. This is a widely accepted time which gives confidence to the placement of the houses. Here is the wheel. 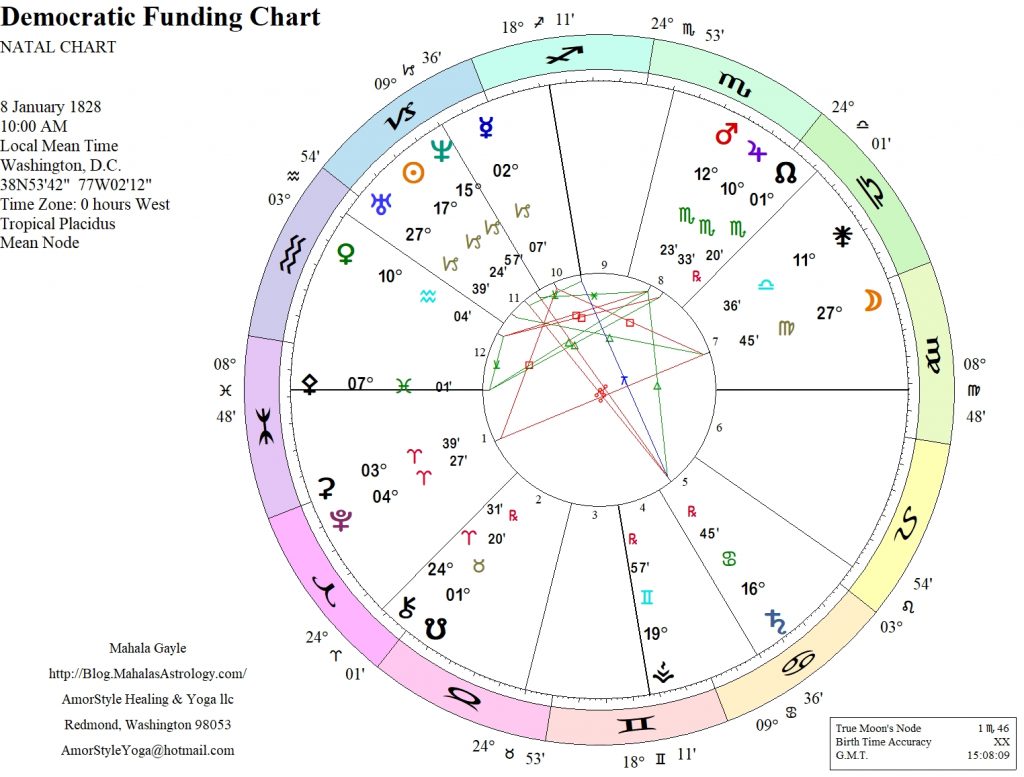 What immediately stands out?

Pallas is the Goddess of just warfare. This asteroid carries with it the influence of wisdom, courage, strategy and skill. This energy is conjunct the ascendant which would make you think that the energy is in direct relation the what defines the democratic identity, Yet, it’s in the 12th house. This puts it at the end of the cycle where that energy is put to work in order to digest what has gone right or wrong. The 12th house is where you either fight to hang onto what didn’t work or you release that energy and regroup for what’s coming. It gives me the feeling that the energy comes from a position of weakness rather than strength. If so, it might manifest as a calculating feminine energy that works from behind the scenes or from a hidden vantage point, rather than standing for justice right out in the open. Pallas and the Ascendant are both in Pisces which gives the overall character of the party a likable energy. It’s a softer energy that is gentle, wise, musical and forgiving.

Yet, the planetary influence in the 1st house is Pluto. This is the planet of the underworld, secrets, hidden agendas, violence, transformation, terrorists and dictatorship. Because the 1st house is directly related to the concept of self, Pluto should have a large influence here. And, this is not going to be a tame Pluto energy, it’s in Aries. It’s going to be on fire. Its aggressive, physical, impulsive, short-tempered and competitive.

Pluto then sits in opposition to the Moon which resides in the 7th house which has to do with stepping outside yourself and building relationships with others. The Moon will make all the partnerships emotional and with Pluto in dissidence, you might expect the darker aspects to be at the root of the emotion. At the same time, since the Moon represents the people and how they view things, they might identify with this party as being the party of transformation and change.

The Moon and Pluto are both square Mercury in the 10th house. That house is all about the intent of the leaders. In this case, it’s all about communication. Seeing that the square is with the planet of the underworld and emotions, it would seem that the leaders of this party will have a strong understanding of the transformational aspects of emotion and how they can use it in order to create the relationships that they want to build. The key thing that I see is here that this double square which plays transformation against the people will most likely be a leading attribute that leaders of this party will use to their advantage.

Neptune is the ruling planet based on the rising sign and it’s conjunct the Sun in Capricorn both in the 11th house. The Capricorn sign is going to bring up the type of energy that will make this party dislike just about everything at one time or another. They can be responsible and disciplined, yet at the same time unforgiving and condescending. Neptune is all about water and it’s the planet with the strongest ties to socialism. This planet is linked to fraud and deception. Together, both of these planets are in the 11th house which is all about emotional maturity and all the aspects associated with making decisions along with living out the dream or life’s work. The Sun, representing the leaders, figureheads, prime ministers and presidents, will most likely be masters of stirring the emotional energies of those following along in order to keep and use that power.

Taking that Sun Neptune conjunction one step further, we can see that Saturn is in direct opposition to it. Saturn is all about restrictions, regulations, structure, poverty, elderly and the like. It’s in the 5th house that is all about how you want to be seen and what your moral actions are. This puts the leadership in an emotional position that is at odds with their morals. It that politics, or what?

This conjunction’s midpoint is also in the 16th degree which aligns to The Tower Tarot card. This energy is related to bring down the institutions that man has built.

The last natal aspect that stands out to me is the Mars and Jupiter conjunction in Scorpio in the 8th house all trine the ascendant. Mars is the planet of war, violent crime, aggression, force, violence, sport and competition. Jupiter is about overflowing abundance, prosperity, law, justice, religious figures, religion, etc. Scorpio will bring out the brave, passionate, stubborn and resourceful aspects of both planets, yet, because they are in the 8th house, these traits will be attributed to how they deal with others. The 8th house is the testing house. It is all about what you love or what you hate. You will be confronted by things that are out of your control and you’ll be forced to have to deal with it. Seeing that this conjunction is trine the ascendant, one might expect that this party will thrive on the energy of conflict and abundance. They will be at home with dealing with these highly emotional interactions between people and have the energy to take advantage of emotional situations that are out of control.

Venus and Jupiter are both 10 degrees into their respective signs which resonates with The Wheel of Fortune. Being in a square and seeing that Venus is in the 12th house, it might hint that there is conflict with regards to what they love and how they love, yet it’s tied to a fighting energy.

Saturn, being in the 5th house is that house of gambling, taking risks and pleasure. It’s also the planet that rules the elderly, the national death rate, sorrow and disappointment. Being in a position that is opposing the power of this party and being the ruling planet, this would be a planet to watch to see what kind of configurations is makes and how the party reacts to that.

This is like the party of the people with the Moon in the 7th house. The leaders are masterful with regards to using the people’s emotion to drive the transformation energy that is at the root of the party. They will most likely take advantage of, or have a great understanding, with regards to how to use emotional situations which cannot be controlled by the individual in order to push their objective. The leaders will work to break down institutions, or at least try because of the Saturn opposition. If all else fails, they will play the female superhero card in order to try to get things in their favor for the start of the next cycle.

I’m sure there are more things in this chart that can be talked about. It might be fun to run the different Pluto Saturn aspects that have happened over time to see how the party resonates with these two powerful energies.