This was created in response to what my Mom posted on her site after the latest Supreme Court Appointment – Planet Alert October 2018. I figured I would dig in in order to expose a little bit more about the republican party based on its formation time. The idea behind this post is to create a placeholder for this information that can be reviewed in future posts.

The time selected for the birth of the republican party is March 20th, 1854 @ 2 pm in New York, New York. As with the case of the democratic birth time, this time is also widely accepted which in turn gives us confidence with regards to the house placement. Here is its wheel. 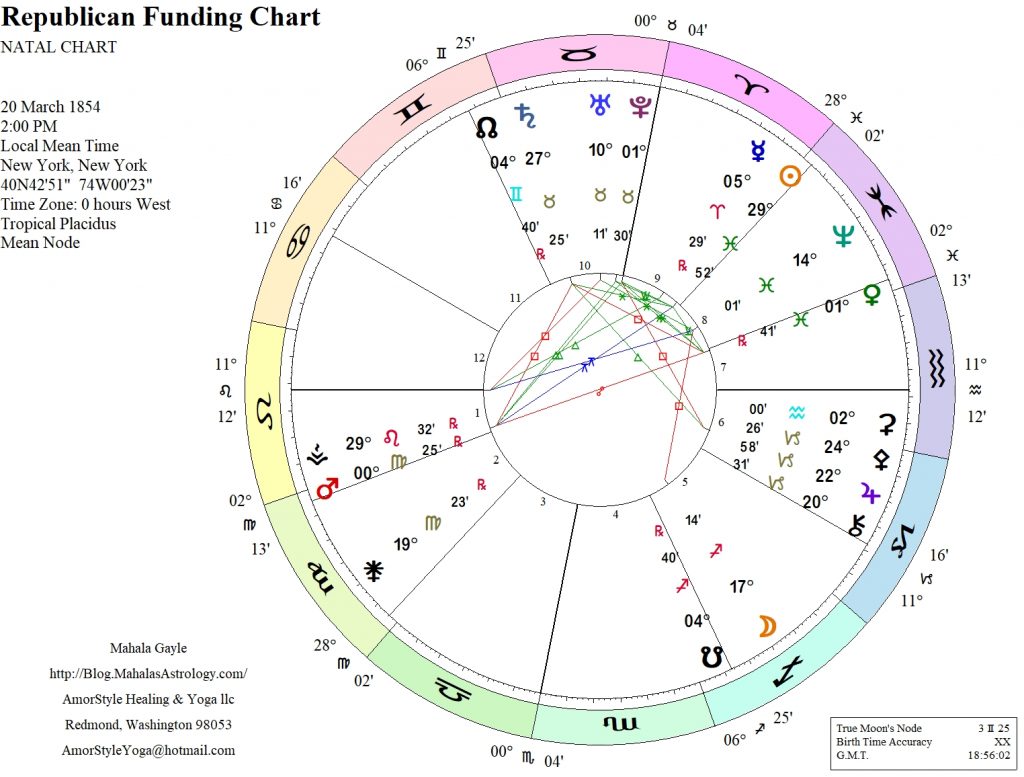 What immediately stands out?

There we have a chart that shows a clean Leo rising. We can expect that this party will identify with Leo characteristics that include being creative, passionate, generous, arrogant, stubborn, self-centered and inflexible. Leo’s are natural born leaders and tend to be pretty self-confident.

When you look energy that will be pivotal in determining what the party identifies with, you’ll find the energies of Mars in Virgo. As I’m sure you’re well aware, Mars is the planet of war, violence, crime, military action, riots, fighting, sports, etc. Seeing that Mars has just changed signs into Virgo, it doesn’t amplify the showy Leo aspects of the war like energy, but rather brings in an analytical, loyal, hardworking aspect of the energy. The Virgo energy is methodical making sure nothing is left to chance, thus one might interpret the Mars influence as being violence with purpose, or war when it’s necessary rather than being emotionally triggered or initiated on a whim.

Mars is in direct opposition to Venus which is in Pisces at the end of the 7th house. Venus is going to represent the arts, fashion, leisure, luxury, entertainment, money and peace. The softness of Venus is magnified in Pisces which is the gentle, wise, musical, intuitive energy that can be overly trusting and fearful. Venus sits on the edge of the 7th house which is all about partnerships and agreements. This is the house where you make emotional connections to other.

When I look at this aspect, I see a party that has a very strong identity to a nit-picky masculine energy that is at odds with the emotional free flowing feminine energy. It might represent an energy that will find flaws in everything artistic or it might be that it will fight anything that is emotionally based.

As it turns out, both Mars and Venus are square Saturn. As with all squares, this will create agitation between the planets by amplifying the restrictive, controlling properties of Saturn. These squares are going to highlight the need for rules and regulations and push for the establishments of contracts. Seeing that Saturn is in Taurus, this party may put lots of effort into creating contracts. They will want the marriage set in stone so no one can change it. You might look at this three-planet configuration as the man saying to the woman – ‘we signed a contract. Fulfill your end of the deal or you’ll be sorry.’

Here, we also want to look towards the Midheaven and we’ll find a couple more aspects with Mars.

Pluto is in Taurus in the 10th house. As we know, the 10th house is all about the intent of the leaders. It is the house that shows how they rule and what their principles are. In this case, we find Pluto (and Uranus and Saturn all independent). With this placement of Pluto, we find that the underworld is a little more grounded. We’re still dealing with secrets, hidden resources, violence, transformation, dictatorship and secret police, but the energy is more reserved. It’s as if the leaders of this party are willing to use the power of Pluto to accomplish their objectives, but they’re not going to jump into it. The only complication is that Pluto is trine Mars. The energy of Pluto and Mars will work together when it’s needed and the trine suggests that there will be good uses of this energy.

It’s also worth noting that in the 10th house, which represents the attributes of the leaders of this party (their principles and mission), we find Uranus, which can bring an explosive energy and Saturn, which brings in restrictions. This is a very strong trio with ties to the ascendant and Mars, which is fortunately grounded in Taurus.

These three planets are all in the house that defines how the party is ruled. Uranus is going to make the leaders explosive, but only once they have been kicked over and over again. That Taurus energy till take it until it hits a breaking point and that’s when you’ll need to watch out. I would expect that this restrictive Saturn energy will play out in the leaders forcing their opponents to follow the letter of the law based on the influences from Jupiter which is trine. That is the planet of litigation in the house that shows the results of your actions.

It’s also worth looking at the Sun, we can’t forget about the Sun which is where the power is centered. The Sun influences come from Pisces and are applied in the 9th house which shows a strong understanding to how the social order works. This is the house of higher education, social growth, technical innovation through high society investments. The unfortunate part is that it’s at odds with Mars in the first house. This might indicate that the energy at the heart of the party is threatened by higher education. Or that the party both wants and doesn’t want higher education or that it only wants a particular type of higher education. Or maybe that this party is very passionate and actively pursues higher education.

Ultimately, the Sun is right on the cusp between the 8th and 9th houses having just come out of Aries. This significantly softens the fiery power at the core of the party yet it hasn’t yet fallen into the 8th house which represents the emotional situations which are out of control of the people. This is a delicate position to be in which is affirmed by the Quincunx to Mars in the 1st house. This puts the power at odds with the might that is available to this party.

Neptune is in the 8th house and it’s in the planetary ruler chain which makes it something to watch. Because of its house placement, I would expect this to be an emotional trigger for members of this party. Transits against Neptune should be evaluated.

This is a masculine party that is at odds with the feminine energy. Its power is in higher education and time will be spent talking about how to make society better through innovation and technology. The leadership is grounded, yet when pushed too far, it’s explosive. The leaders most likely have secrets and or dark connections (Pluto) and they know all about this world and how to use that to their advantage. The people will see this party as risky, yet might align on moral grounds.

I’m sure there is more, but that’s a pretty good summary for now.